Bit of a debrief after Rotterdam dust settles

I have come to realise over many years of coaching how hard it is to get your ducks aligned just right and get the result your athlete deserves. At the World Championship level, it is just so tough. Many, many times I have helped prepare athletes to be in the best shape of their lives for one day in a year, but you never know who is racing, who the athlete will be up against from a competitive point of view, the elements that they will have to endure, which can be so different from what they trained in during the lead up. Then you throw in travel, and the less the athlete has traveled to big World level races the less likely they are just to step off the plane and have the race of their lives, due to acclimatization etc. It’s a bit of a lottery, and you can only shorten the odds by how you prepare them

These days I take no expectation into a World Championship level race, all I hope for is the athletes to execute the best possible race they can right up to their ability and see where that gets them. I can only control the process, not the outcome as a coach at that level. With our athletes at Chattanooga 70.3 and Rotterdam ITU Worlds I took this approach. Prepare as best we can, ensure they do all the right things in travel, taper, race plan and then sit back and see what happens.

CHATTANOOGA 70.3 WORLDS
Our Chattanooga athletes came up against a brutal course and conditions very different to a Melbourne Winter. It’s difficult to truly understand how demanding a course can be till you have had that race day experience, and I think the difficulty of the course at Chattanooga might have surprised a few of our athletes. They raced confidently and hard from the start, backing themselves and their fitness. We had a few swim / bike specialists so it was honest racing from the gun and then hang on. That’s what you have to do on the World stage if you want success, too conservative won’t get you anywhere if you are going for podium or top ten. Yes they had specific zones to stay within early on specific climbs but they weren’t hanging around, each athlete gave it their best effort. 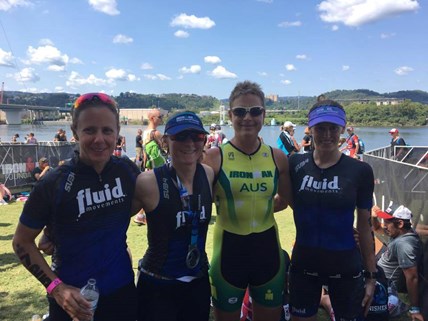 I was so proud of each of our athletes efforts, the talent pool they were up against is like chalk and cheese compared to our local events, and they fought hard. The size of the 70.3 Worlds age groups were massive, I know Laura had over 200 females in her age group, and Juan over 300 males.

Following Chattanooga, we have our short course athletes, Lance, Leigh Camilla and Joseph lining up at ITU Worlds Rotterdam. Lance had raced on the worlds stage in 2016 at Mexico, but outside of that we were pretty raw for Worlds experience. The good thing about Rotterdam is that it would be quite cool and similar to Melbourne’s weather so that was one less uncontrollable to contend with from a coaches point of view.

ROTTERDAM ITU SPRINT / STANDARD WORLDS
The course looked to be tight and technical with lots of dead 180 degree turns on the bike and similar on the run, but flat. Finding a race rhythm would be difficult, so it was a matter of training the athletes in the lead up with lots of variable paced workouts so they could handle the constant changes of pace the course would throw up. Also for our athletes that weren’t naturally powerful, it was important not to burn too many matches with overly hard accelerations out of the corners.

With this bike handling and cornering skills would undoubtedly be a factor, so we conducted a few handling sessions to hone their skills and ensure they maintained adequate cornering speeds. Taper went well, it was quite windy in the days leading up so a few sessions had to be moved to avoid the weather, but all in all seemed to go smoothly.

Race day finally arrived, and it was now up to the crew to get the best out of themselves, and that they did.
I was confident in their swim ability as we had done a mountain of work in the pool. Swimming well in short course racing is very important and exciting the water, each of them were in good positions to give themselves the best chance to finish well. The lads swam low 20mins for the 1500m and Camilla was 13mins in the Sprint for the 750m, great swims as expected.
Going into the bike I knew they were fit and had the tools to do their best, but on the tight cobbled windy course in Rotterdam it was risky so the first goal, don’t drop the bike, second goal use your skills and maintain momentum at every opportunity. This is the key to riding well on a stop / start course such as Rotterdam.

Onto the run at World level it is imperative to run right up to your ability and hit your race rhythm as quickly as possible. In training we had done a lot of brick training, running at race pace and above off a hard bike with an emphasis on hitting your pace as early as possible and hanging onto it. The crew were conditioned well to do this so once they all came off their bikes unscathed it was a matter of head down and let the fitness and speed come to the fore. And that it did, with some great runs to finish off the day. Leigh ran 33 mid off the bike, Lance a 36min split, Joseph was 40mins and Camilla 20mins off the bike in the 5km sprint run.

Back in Melbourne in the middle of the night we waited for the results to slowly feed through onto the ITU website. I know that many of our athletes were up just like me, our squad is a real family and that is what I am so proud about, how we all support each other when someone races. Knowing how much work over winter had gone into their preparations we were all keen to see how they went.

Then suddenly the results came in and we had some great news. Leigh Anderson had won the Silver medal in the Standard race in 35-39 age group in a ripping time of 1:58hrs on that tight technical course. Lance Bos had raced beyond my expectations and to run 36mins off the bike after suffering ITB issues and having the resort to Elliptical trainer for a lot of his run training. Joseph Paterson finished off his race so well with consistently great splits for swim, bike and run and Camilla Forss had a great race with 13th in her age for the Sprint distance.

It was a prized day for me as coach, as I had learned not to expect results, but when they came I was over the moon. Our Fluid/MTC crew have won a number of World Championship Golds over the years and a few podiums with Ken Murley, Vanessa and Jenny Zenker but this result was especially sweet due to a rough personal leadup to this race. 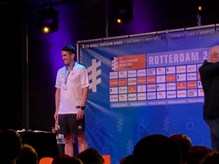 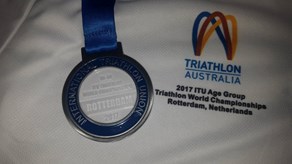 To say my wife, Lyndsey and I had endured a rough Winter would be understating it. Late June I suffered a 15cm DVT in my calf which caused pulmonary embolisms in my lungs. I was released from hospital with a course of blood thinners, then 2 days later I had a stroke as a result of a blood clot from my DVT escaping through a newly discovered hole in my heart which saw me back in hospital.
After a few days I was released from hospital with all the stroke symptoms gone, then 7 weeks later I suffered my first serious bike crash after 22years of riding.
Lots of broken bones, including my humerus which required a 11cm plate and screws , 2 broken ribs a punctured lung and a chunk out of my face. Then on top of that a coach leaving us with a number of Fluids squad athletes just made for a very tough time. BUT withstanding all those hurdles with the unrelenting help of Lynds we never skipped a beat with the athletes or the level of coaching we provided our crew.

To see it all pay off with outstanding performances on the World’s stage and a podium Silver medal just made it so much sweeter. A bit exhausted right now, but succeeding despite adversity has given me a little time to sit back, reflect and say we did good as a squad, a Club with the great bunch of humans we coach.