Noosa was the second of my 3 target races for this season and my first open category race. My goal was to come in the top 5 overall and within 8% of the winning elite males time.

Prior to the race I had done some research on previous competitors and times and I knew given my day I had an opportunity to be right in the mix but I was going to need to race well.

The lead in from worlds to this race was quite intense. Working first on top end speed and slowly building my load. I also raced Yarrawonga 2 weeks prior to keep my racing skills up and to hopefully keep my confidence going. If I had my time over I'm not sure I would have done this as the race recovery and increase in load came close to breaking me and I was just happy to get through without an injury. Race week saw me with a lot of niggles and feeling quite low but as each taper day eased my training back I started to regain my strength.

The atmosphere at Noosa was amazing, there were a heap of Fluid/MTC members up for the race and the town was alive. In the days leading up to the race I was very focussed on getting everything organised, making sure I ate well, stayed hydrated and was mentally prepared for the race. I also tried to relax a little, sometimes I find I can take racing too seriously and forget that I love doing this.

Race day kicked off at 3.40am as I had an early wave start and wanted to make sure I had time to get my nutrition in and was calm and relaxed heading into the race. My wave started just after the pros. Whilst I was nervous I couldn't wait to get in the water and get the job done. 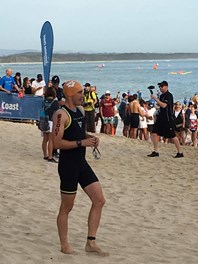 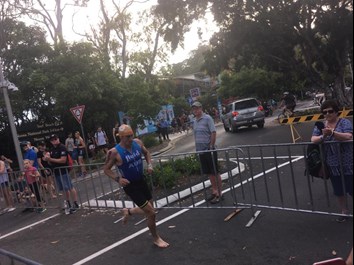 The siren started and the race began, I used my height at the start of the swim and managed to get a body in front of all but one athlete, as I started to swim I concentrated on pulling 50 long firm and deliberate strokes, a strategy which in previous races had put me comfortably in the lead of the swim. As I was pulling I noticed one swimmer take off, too far away from me to grab his feet I had to let him go and concentrate on my own race. 50 strokes in eased into a solid sustainable effort and with only one swimmer in front of me was comfortale that I had the gap that I needed. It was at about that moment the swimmer behind me ran in to my feet, not to worry a few more hard strokes and I'll drop him. I pushed the strokes out and then settled back only to feel him on my feet again. I chanced a look behind and noticed that a small group had all grabbed feet behind me. It stayed like this until half way through the race and I was thinking I've got to do something here, I'm working my arse off and these guys are going to be fresh as a daisy coming out of the water. I backed off and then put in an almighty effort burning several matches to put a gap of 10 or 15 meters on them. Perfect I thought and then next thing I know they were on my feet again! I was to learn a lesson here that would repeat itself throughout the race, these guys were good enough to hold off my surges and composed enough to conserve their energy. With about 400 left on the swim a competitor tried to make a break, I pushed hard, held his feet and got a well needed breather leading in to the beach. We managed to drop the others but not by much and exited the water together in 2nd.

The long run to transition was punctuated by two warring turkeys who flew straight in to me half way through, I was so shocked I just laughed and took it in my stride. The hot shots did nothing for my cramps as I battled with spasming muscles and had to back off on the run.

My strategy on the bike was to ride within a range for the first 5km to let myself ease in to the ride rather than blowing up early. With the excitement of the race and the realisation that I was in the mix it was hard to do but I held steady. A group of 3 formed and we headed out of town. At the 5k mark I started to put on the power but it meant nothing to these guys who easily kept up with me happily setting up a pace line within the rules behind me. After a couple of kms realising they had my measure I dropped back in the line. Approaching the hill my race plan had been to keep to 120% of FTP or below, as I sat behind these guys I decided to divert off plan and drop them on the hill. Cycling is my strong point and I figured I needed to use it, the hill was where the least draft advantage was and I figured that was moment. I hit the hill with intent and started pushing out some big watts, I knew it was unsustainable but if I could just put a gap on them I could ease off and not have them on my wheel. Half way up the hill I looked back and it was working, you ripper! I backed off to a hard but more sustainable pace with 1.5km of the climb to go. As I backed off another competitor came from nowhere screaming up the hill, way too fast for me, let him go. I maintained my pace only to discover as I crested the hill, everyone was back on my wheel, these guys definitely had my measure. I backed off, I had already burnt too many matches and it would appear I was no chance of shaking these guys. A group of 5 or 6 had formed and the lead bunch accompanied by a TA drafting official rode together for the next 25kms. The lead changed but it was mainly two riders at the front of the group. I hadn't paid much attention until we got 2 or 3km from transition and one of the ‘passengers’ attacked. I was sitting 2 back and figured the lead cyclist would close the gap as had been happening on every attack all race but this time it didn't. As the gap slowly widened I considered going and decided to stay put, my running has been getting faster and my legs were fresher than normal, I would chase him down on the run. This would turn out to be another mistake.

I came out of T2 fourth neck and neck with third, first and second in my sights. My strategy was to take it easier in the first km, my problems nearly always stem from going too hard too early. Third pulled away from me and I let him go thinking I would peg him back, not realising his legs were fresher than mine. As the kilometres wore on mentally I pushed harder. I was catching the guy in 3rd but my god was I having to dig deep. Nothing was going to come easy in this race. The guy I exited transition with was now mowing down the winner and gapping me more as time went on. At maybe kilometre 5 or 6 I finally moved in to 3rd. I was hurting so badly and the weather was heating up, shit how am I going to hold this guy off let alone try and chase down the leaders. I focussed on embracing my pain and pushing my body, I told myself over and over that your mind always gives up before your body, demand more and it will deliver. Every inch of me was screaming to stop but I wanted this so badly. I had worked so hard and I just had to hold on for a few more kms. As I came in to town and the crowds built and people started telling me that I had a few hundred meters on him, holy shit I'm going to make it. I pushed until I had nothing left and crossed the line spent. Holy shit, I did it.

The atmosphere after the race was magic, the open athletes and the elites hung out under the hoses in the post-race glow sharing war stories. I couldn't wipe the smile off my face. Not only had I come to the biggest Olympic distance race in the world I had raced some great competitors and managed to hold my own. They outwitted me, out foxed me and in the end out ran me but I kept with them almost to the very end. Such an awesome race.

An amazing weekend topped off by the incredible support and race efforts from all the Fluid / MTC crew up for the weekend.