Part 2: Off Season – Time to improve your running.

In part one of this blog we discussed the basics of how and why you should use the Off Season to improve your running. You can find Part 1 here http://fluidmovements.com/blog/2016/may/off-season-time-to-improve-your-running

In Part 2 it’s now time to get to the nuts and bolts of what training is required to significantly improve your running. 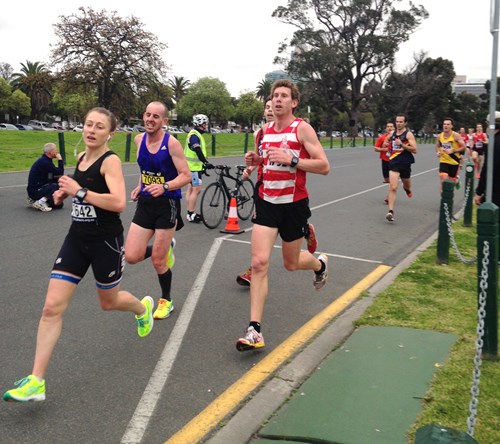 Lesley West on her way to a 36:53min 10k at the Albert Park XCR event last Off Season

Firstly it’s important to set out why you would want to do a specific run block. For most triathletes it would be to improve their run leg. In this case it could mean dedicating more of your overall triathlon training load to running for a period whilst it’s the off season.  In turn this would mean allocating more recovery time to adapt to the increased run load.

The type of run sessions that may be included:

Example – 80m strides or builds as part of the warm up, or quality 200-400m track intervals later in the block.

Obviously the ratio of training elements would vary depending on the running history, ability and goals of the runner. A coach would be useful in this area to ascertain the best mix of training dependant on this. A more novice runner with less running history would likely have a higher percentage of easier aerobic running relatively.

The incremental build of training frequency, duration and intensity is known as progressive overload.

This important principle should be carefully applied to each athletes build through a period of training like this. The number one goal of an Off Season run improvement block is to remain injury free. Be considered when setting a plan, using an experienced coach to oversee the planning and implementation of the plan is recommended.

An End Goal – Finally if I was a short course athlete, a major goal of a run program such as this would be to improve my 10k run speed by it completion. Ideally the block would finish 1-2months prior to the start of the triathlon season, giving plenty of time to springboard of this great Off Season base and be flying by Race 1.

If I was an Ironman athlete, the run goal would be to improve my half marathon speed for the same reasons.

Hope this helps, and you all turn your run into a weapon come the regular season.

Posted by Sean Foster on 19 May 2016
0 comments Running, Racing
comments powered by Disqus