"You never know what will happen on race day..."

Perhaps the most over-used phrase in race week. We use it to both give ourselves hope, but also to downplay our expectations:

"...everything might fall exactly into place and I'll have the best race ever"

"...everything might be going right and then I'll get a flat. I'll drop my nutrition. I'll slip on a banana skin..."

And the closer we get to race day, the more frequently we say those words! But finally I was there. After an extra-long build, it was finally time to really put myself to the test.

Everything went smoothly. An unexciting race morning is exactly what an athlete wants!

Quick swim to turn the arms over, then time to line-up. 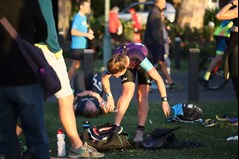 It was a self-seeded rolling start, so I positioned myself in the 1:00-1:07 section. Based on how I'd been swimming recently, this seemed the right place to be (not accounting for the ridiculous current on race day!). Next thing, I was at the front of my line and it was go time!

Race plan was to get the arms turning over through the swell to the first turning buoys, then try to just settle in and find some feet if possible. The current was against us for the first long stretch, and I could really feel it in my arms. Just kept focusing on my stroke and eventually made it to the far turning buoys. Looping back on ourselves we were with the current. Tried to lengthen my stroke a bit and to swim as straight as possible.

Finally, made it to the final buoy to turn in towards shore.

Running out of the water I could hear the support crew cheering as I ran through to T1 as quickly as possible.

Uneventful. Took my time to put on socks and slap on some suncream

My new favourite leg! Jumped (ok, more of a stopped and stepped over) onto the bike and off I went. On the road out of Palm Cove I heard Foz shout something about "don't worry, the swims were all about 5mins slow". To which I basically brushed him off and gave him a 'look'. Sorry coach!!

I've got a bit of a tendency to go too hard at the start of the bike leg, so I probably sat just above the planned power for the first trip out to Port Douglas. Was riding around a few guys, so just tried to keep them in my sight.

Nutrition like clockwork, with something every 15mins, and picked up some water at every aid station. Used it to fill my front bidon, popped in half a Shotz tab and away again!

Power was dropping a bit, but at the expected rate, so wasn't concerned. Until the 2nd turnaround at Port Douglas when all of a sudden I felt I had nothing.

Just put head down, shook out negative thoughts and got back to work. Saw Juan going the other way, and calculated he was about 2km behind me. Kept waiting for him to pass me, and at 150km mark he came by. It was the final push I needed to get me through the tough headwind all the way back to Cairns.

My very best estimate time for the bike had been 5:25.

Bliister plasters on, quick wee stop and we're off again

This was where the fun (fun=pain) was going to start! I had no idea where I was placing or where anyone else in my age group was. I knew Rosie and Zoe would be in front somewhere, being the super-swimmers that they are.

My main aim was to try not to set off too fast, to just gradually settle in and then try to hold on. I hadn't done anything longer than 2hours 15, so had no idea how this was going to play out.

Nutrition plan was to take sips from my gel bottle as much as I could stomach. I'd grab water and ice at every aid station on the first lap; 2nd lap I'd walk through every 2nd aid station and grab some coke / Red Bull; 3rd lap walk every aid station if needed and grab what I need.

Finally managed to settle in and find my comfortable pace. Saw Lawrence and Julie-Anne at the far turnaround "I think I need a tactical spew". Lovely! Clearly this is why my husband loves me...

Everything felt good. I was surprised! Until about 13km when I got a wave of stomach cramp. Not a good sign. Next wave came at about 16km. Then 19km. It was going to be a long way to 42km if this kept happening. Which unfortunately it did, at roughly 2km intervals. I kept telling myself I'd go to the toilet at the next aid station. But by the time I got there, the thought of wasting time made me keep going!

At each turnaround I'd seen both Rosie and Zoe in front of me. They were the only two I knew though, and I could actually have been in 10th place for all I knew!

Bit by bit, I just plodded on through. In between walking the aid stations my pace stayed pretty consistent. I was averaging about 4:45 pace which was about 15 seconds better than I thought I'd manage.

All of a sudden I was down to just 5km to go. Sean had warned us not to leave it until the last km, and to pick it up at this point if possible. Towards the end of the 2nd lap, Kim had shouted to me that I was in 2nd place (I may have responded with a big "sshhhhhhhh". For some reason I prefer not to know). So I now wondered if I could maybe make it to first. I didn't know how far ahead of me Rosie had started, or how far in front she now was, but I figured I might as well give it a go.

I could see Juan ahead of me and just kept focused on reaching that finish line. I caught him with about 400m to go meaning that we finished within about 10 seconds of each other - pretty much the perfect finish to my race! 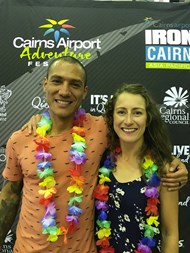 (Firstly, if you made it this far in the report, well done!)

Wow! I truly did not expect that to happen. The 'best case, unlikely to happen' scenario had been calculated out at 10:10. So to go 9:58 at my first Ironman, winning my age group and securing my slot to Kona was pretty surreal. Although I apparently crossed the finish line looking fairly comfortable, I definitely didn't feel it in the recovery tent. I stopped, but the adrenaline kept flowing! It was a slow process to: get to chairs for a seat; go to the bathroom (finally!); nearly throw up; get an anti-sickness tablet; get changed; speak to random people I didn't know; wander down for a massage; and then eventually make it out of the tent to see the amazing people who had been out there cheering for us all day!

Support team, we couldn't do this without you. I've been there, I know how tiring it is to spectate (and keep my entire family back in the UK updated on what's happening!).

I knew I had it in me to have a good race, but as I said at the start "you never know what will happen on race day".

I could write a whole other piece about all of the great people who helped to get me here. But that might become a bit boring. So in short: 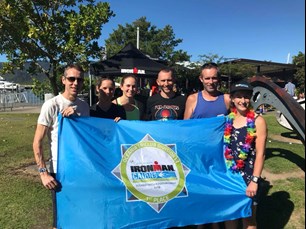