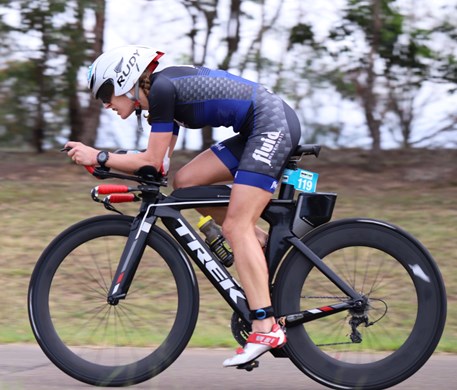 Fluid athlete Laura Torres by any measure has had a massive year results wise in Triathlon, becoming a World ITU Champion and NZ National Champion and winning overall female at both 70.3 Cairns and Western Sydney. It wasn’t always the case though especially on the international stage, and it took some rethinking of how Laura trained following Mooloolaba Olympic in March this year to find the right mix of intensity and volume.

One of Laura’s best attributes is that she is a smart athlete who is self-aware of her training and how she adapts to it, which helps a lot when being her coach.

After say 6month blocks of training and racing I usually sat down with Laura and ask her opinion of what she felt worked and didn’t work for her over that period. After Mooloolaba  earlier this year where she finished 6th in Open with a solid race, we took time to assess her goals for the rest of 2018 and what principles of training we needed to do in order to reach those goals.

THE GOAL: Best possible results at the 70.3 distance but also race ITU GC Standard Worlds along the way.

THE TRAINING : Coming out of a period of predominantly short course racing typically Laura would do a greater % of higher intensity variable paced training near Lactate Threshold for speed development as well as her other elements and it was a great grounding for her and served her well.

We looked at Laura’s physical attributes finding that her natural ability was more to hold speed v’s naturally generate it and with 70.3 as her major goal distance this suited a slight shift in the principles of her training.

Laura always responded well to moderate to high intensity resistance style strength work such as hills so I incorporated a lot of hill interval work into her biking and running training. Also Laura enjoyed intensity near under load so I added periodic key brick sessions where Laura would run close to 70.3 race pace on flat legs immediately following quality on the bike.

Along those lines another key training day was double bike Wednesday with included moderate sustained riding in the morning followed by higher intensity interval work neat FTP60 on the kickr in the evening.

Soon all of Laura’s training numbers and paces were heading in the right direction. A run test set I would set Laura was 4 x 2km run intervals with ascending recoveries holding 85%max, and the 3:40min per k pace she was able to hold was PB pace. The new tact in her training was certainly starting to pay dividends.

Laura had a great race, solid swim and then on the bike she held the highest average power she has ever held in a 70.3, and then ran close to a PB half marathon run off the bike. Laura was the first age grouper finished, taking the tape and she won her age group by 13mins. Great start and both coach and athletes were happy!

Laura’s ability to absorb load is good, so we didn’t taper off too long before we were back to work.

With a couple more months of training under the belt I had Laura do a local duathlon as a training race, un tapered in early August and wasn’t expecting much. It was a 5k run, 20km bike ride and a 3km run to finish. She had a solid first run coming into T1 second in age, but when she jumped on the bike for her 20km ride Laura just took off. This was a little unexpected, she put over 2mins into the rest of a quality field over 20kms then held on for the overall female win with a great second run.

This performance really pricked up my attention as her coach, especially the bike ride as I hadn’t seen this before from Laura in a race, some very good power numbers closer to her FTP and her second run relative to others under load was much better. I was starting to think that we were onto something here with the mix of her training.

As we had set 70.3 as the goal triathlon distance for 2018, when ITU Worlds came around I hadn’t given it much thought. I was going to taper Laura for it as you have to show a World Championship some respect but as to how she would go wasn’t a big focus.

Race day came along and Laura was up against multiple World Champions a plenty in her age group, the local Championships had her age group stacked with talent.

Laura didn’t get off the line well and was over 2mins down on the leader and down against most of the competition coming into T1. I was standing next to transition and watched as Laura completely fluffed her T1, forgetting to put on her helmet which is very unusual for her. At that point I thought…. OK this will be just a solid training race.

It was a 2lap bike and Laura rode very quickly through the field and into the lead. I now realized that her bike performance at the Duathlon certainly wasn’t a one off and by bikes end she was leading with only one athlete going with her. Coming into T2 Laura had put minutes into the rest of the main girls with another PB bike. Laura then backed up her great ride holding off her competition and running to a new 10km PB and the ITU World Championship for her age.

NEW.WORLD.CHAMPION – I was so proud of her, I’m not sure if Laura expected it but as her coach I hadn’t. It was another big leap in her racing performance in 2018 and a great validation of the training that was set over the last few months. 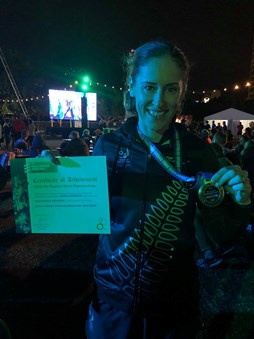 With Western Sydney being Laura’s final major race of 2018 and the distance I had set her for, this was a big test. I made the long drive up to watch her and some other squad athletes race.

Race morning arrived and it was nice and cool with hardly any wind, perfect conditions. It’s held at the International Regatta Centre in Penrith, purpose built rowing venue and a great venue to spectate the race.

We were hoping the swim was called non-wetsuit as Laura swims better relatively to others when it is, but it ended up being wetsuit optional. At any rate Laura had a solid 29min swim for the 1.9km, coming out behind a couple of girls from another age group in the same wave, but she was quickly on the bike and into her work. Before long Laura was out in front of the age group field and riding strongly. She had picked up some unwanted male passengers as she cut through the earlier waves.

I got out for a run and went about 10kms up the road, the course was pretty fast and the wind was remaining low, great conditions for a fast bike split. Laura was motoring along and when she came into T2 she was well in front with another PB bike split for the 90kms, 2:22hrs at an average speed of 38.04km/hr, which was flying!

The question was did she have enough legs for the 21km run after taking out the bike so hard. It was heating up and athlete Anthea Stacey from another age group was around 3.5mins back as the run started.  Anthea was a World 70.3 Championship podium athlete from a couple of years ago so her pedigree was good.

Through 10kms Laura was holding sub 4min/km pace so was hauling, but as you come onto the Regatta section it gets hot with no tree cover. I was pretty loud and into her to keep pushing as Anthea was running well and coming.

In typical style Laura responded to my not so subtle encouragement, dug deep and held her form and speed very well over the final 7kms of the Half Marathon to take the overall age group win with another PB run of 1:27hrs.

It was a stunning overall time for Laura, 4:21:50hrs which was an age course record at Western Sydney 70.3. Laura PBéd her bike by 6minutes, her run by 2minutes and overall time by 13minutes. Her time was good enough for 4th in the field with only 3 pro females ahead of her and only 2mins off the pro podium.

I could tell this meant a lot to Laura post-race, it was a culmination of our planning for this year and she delivered in spades. Not bad for an athlete that did one of our squad Triathlon Beginner Courses only 3.5years ago

It was also validation for the new program we developed together earlier in the year. Laura’s bike riding ability has taken a big jump in a relatively short period of time and over her last 2 big races Laura has backed up a great ride with a new 10km run PB at ITU GC, and a new 21.1km run PB at Western Sydney. 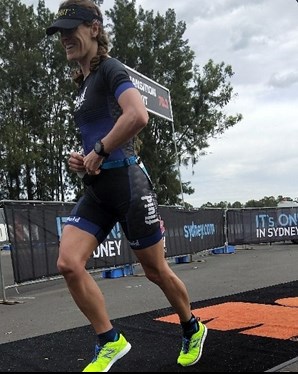 Through 2 decades of coaching I have come to realise there is a number of different ways to coach an athlete to the same goal, but it’s about finding the right mix of volume and intensity for that individual athlete. This year it was spot on for Laura and her input into that process was vital to this outcome.

So proud of her relentless professionalism as an athlete, not just with her principle s.b.r sessions but also with her recovery, conditioning, dietary and lifestyle choices. When you put all those one percenters together it really makes a difference.

It’s great to coach an athlete like Laura who can show what the program can do if everything is adhered to just right.